Our identity as a people of basalt and sea, of whale-hunters, of believers in the Holy Spirit, of constant departures in search of horizons imagined and praised by dreams. In our escapes from telluric phenomena, our identity never fades as we transcend the frontier that confines the island, transforming the sea into a necessary road.

Regardless of the final destination, the experience of the islands and its divulgation in other Portuguese regions or in the host countries is always one of the firmest intents of the Azorean spirit.

In the region of Algarve, this intention inspired the concerted efforts of the Azorean diaspora, which led to the creation, in 1992, of the Nucleus of the Azores in Algarve, a non official institution that for almost two years coherently and successfully implemented its agenda.

Of the many activities that were undertaken, we should highlight an excursion to the island of S. Miguel at the end of January of 1993, an event that joined and enthused more than one hundred and fifty persons, such as representatives of local government, professors of different disciplines, entrepreneurs and many other entities that, for the very first time, came into contact with the insular reality of the Archipelago of the Azores.

As a consequence of this successful and happy occurrence, new and ample horizons surged, leading to the formation of a shared opinion among the members of the Nucleus and its associates, which are always present when significant decisions are taken. The consensus view, now more definitive and official, is that the whole of the Azores should be divulged in our host region, Algarve.

It is in this context that the House of the Azores of Algarve was established and officially constituted in the Public Registry Office of Faro, in May of 1993. Its formal establishment implied the legal dissolution of the preceding Nucleus.

Until 1994, due to the lack of a head office, members of the House of the Azores met in the most diverse places and coordinated efforts pursuant to its stated purpose.

By virtue of an opportune and happy circumstance, on the same date the House of the Azores of Algarve was established, an old and humble house, located in Faro’s city center, at Largo da Estação, was rented. Though not offering the most desirable architectural conditions, it nonetheless became a much-needed meeting-point that permuted the effective coordination of a more ambitious program to promote “azoreanity” in the region. A detail of undeniable salience, that distinguishes the Azorean diaspora that lives and works in the extreme south of Portugal, is that there are approximately one hundred Azoreans living in this geographically dispersed area that stretches from the frontier with Spain to Ponta de Sagres. This fact means that there is a double responsibility to which the House of Azores of Algarve can not, and will not, ignore, namely: to direct its activities simultaneously to the quantitatively less significant Azorean diaspora and to the open and receptive host community.

It is well known that the House of the Azores of Algarve is an institution whose values originated in the islands. These values, however, are shared throughout the host region. This is expressed in the fact that various municipalities and other representative entities have invited the House of the Azores to participate in joint projects and partnerships in areas where Azoreans reside.

Our honest and close relationship with the entities from the host regions has engendered gratifying synergies that have been developed in a meticulous and salutary manner. The intent is to engender and articulate useful and lasting relations.

Without any complaints ever been presented and hoping for a better future, it is worth noting that the House of the Azores, due to the lack of an adequate venue, is presently incapable of supporting most of the activities that are programmed. In order to be able to make these activities viable, the House depends on the good will of local entities that have occasionally provided access to municipal auditoriums, galleries, libraries, gardens and other venues for the organization of events.

The identity of the Archipelago of the Azores is clearly expressed and divulged, from the smallest cultural detail to the noticeable progress that presently characterizes the nine islands of the Autonomous Region.

One of our principal concerns as an institution is to afford the possibility to divulge poetry and poets, oeuvres and writers. We organize painting and photography expositions, presentations of literary works, craftwork exhibitions, musical events, folk chants, speeches and roundtable discussions about the most diverse subjects. These activities, which emanate from the intention and the responsibility do divulge Azorean culture, are directed at an ample audience. Here, the Azores is both an object and an echo of knowledge and curiosity.

We seek to divulge the historical memories of whaling, a subject that arouses interest and curiosity, as well as artistic works of scrimshaw and whalebone. We divulge some of the rarest and most unique art forms, such as  fig-pith carving, and the immense talent that transforms onion and garlic shells or fish scales into pictures or various adornments. These are some of the activities that are organized by the House of the Azores which benefit the Algarve.

Several other aspects of the Azorean identity are habitually addressed by the House and enthusiastically welcomed by the host community, enabling a comprehensive view of the Archipelago, its islands, people, and traditions.

Reliving the past through the presentation of traditional costumes in festive parades, divulging Azorean gastronomy and promoting the flavors of our islands are some of the activities that have been undertaken by the House of Azores of Algarve and the Azorean diaspora to sensitize the host community.

We have also sought to entice the entrepreneurial class to engage in greater commercial exchanges both in the Azores and in the host region. Presently this effort has not been fruitful but in the future if may produce results that are both beneficial and necessary.

However, the most significant achievement of the House of the Azores in the region of Algarve was the revival of the Holy Spirit festivities.

As far as it is known, the worship and celebration of the Holy Spirit in the extreme south of the Portuguese mainland dates back to the middle of the 19th century and is historically associated with the city of Tavira.

On the 9th of June 1993, almost a century and a half after the last Holy Spirit festivities, the House of Azores revitalized this venerable tradition.

Thenceforth, year after year, the event “Worship and Festivities of the Divine Holy Spirit in the Nine Islands” re-enacts the experience of sharing.

The Holy Spirit processions, the crowns, the flags, the philharmonics, the masses with their chants and crownings and the traditional soups, always cooked by cooks from the Azores with ingredients from the islands, has perpetuated this tradition.

Every year, at the appropriate time, an island or a municipality of the Azores is represented in various municipalities of the Algarve that welcome and experience this tradition that the Azorean people has preserved and divulged throughout the centuries.

Founded in the communal experience of sharing, these festivities of the Holy Spirit, widely considered as the grandest in mainland Portugal, served as the backdrop of the twinning of the cities Lagoa-Azores/Lagoa-Algarve, an event that was experienced by more than six hundred persons.

In these diverse exchanges, which are shared by the Autonomous Region, we should note that until the advent of electronic mail, the House of Azores responded satisfactorily to explicit bureaucratic solicitations to find teachers to fill vacancies in diverse educational establishments in our islands.

A brief editorial note: the cultural bulletin “Nine Islands” started being distributed on the month of October of 2007. At the present time, it is not regularly published but it compensates for this irregularity by offering better quality and more diversified contents. Our constant efforts to innovate led, in October 2008, to the organization of the First Cultural Week of the Azores in Algarve, whose theme “Azores-Literature, Music and Flavors” was very well-received by the host community, obliging us to continue organizing it.

The House of Azores has honorably participated in various events, the most noteworthy being: “Fatacil, the Craftwork, Tourism, Agriculture, Commerce and Industry Fair of Lagoa”, the largest event of its kind south of the river Tejo. We also participated in the “Fair of Sweets, Dry Fruits, and Regional Drinks” and in the “Fishing Events of the Regional Houses.” We should also mention our participation in the “Inter and Multicultural Schools’ Meeting” and the support granted to schools where activities concerning the Azores are developed every school year. The purpose of these undertakings is grounded on the project to divulge the image of the Azores.

Our essential goal is that of establishing a close and diversified collaboration between Algarve and the Azores, strengthened daily on the basis of the shared interest of the development of the Autonomous Region of the Azores. We act in accordance with the protocol that was established with the Regional Directorate for the Communities.

In 2005, the members of the House of Azores of Algarve “unanimously approved”, for the first time, the attribution of the distinction of Honorary Member to a distinguished gentleman, the then President of the Regional Government of the Azores, Carlos César. On the month of May of the following year, he honored us with his presence in Algarve where, in the city of Faro and in a solemn session, a diploma was offered to the President.

The House of the Azores of Algarve was awarded the Medal of Merit of the City of Faro, a tribute that recognizes its importance for the Municipality.

The Third Cultural Exchange Brazil/Portugal, organized by ALAP – The Academy of Letters and Arts of Paranapuã, Rio de Janeiro and the Museum Maria da Fontinha, Castro D’Aire, attributed the AustragésiloAthayde Diploma of Honor and Merit to the House of the Azores in Algarve “in recognition for its contribution to the aggrandizement of Portuguese-Brazilian Culture.” In a solemn event that took place at the Auditorium of the Civil Government of the city of Faro, attended by twenty-two members of the aforementioned Academy and many guests, the Diploma of Recognition of Merit for “services rendered on behalf of Culture and Lusofonia, was granted by the Elos Club of Leiria, an affiliate organization of the International Elos of the Lusíada Community.

Truth be told, such distinctions do not belong exclusively to the House of the Azores of Algarve. More than a right bestowed, it is a duty to share these distinctions with everyone that lives and works in the nine islands of the Azores who, in the middle of the Atlantic, never forget those that long for their islands.

The time we are living in instills responsibility does not allow for despondency and regrets but incites us instead to move resolutely towards a future free of deviation and stagnation. 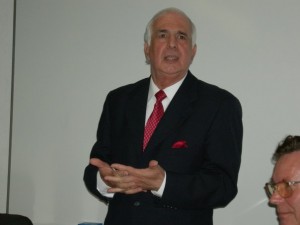 Assembly member/representative of the Assembly

Assembly member/representative of the Assembly with the right to vote